The Imagination Engine® or Imagitron™

Summary - In 1975, our founder made an amazing discovery: If an artificial neural network is trained upon all that is known about some realm of knowledge and then internally 'tickled' at just the right level, it outputs new potential ideas (i.e., novel or confabulation patterns) that are based upon such cumulative information. Such a neural discovery engine is amazing in that it takes only seconds or minutes to form itself. Once combined with another neural network that models human perception of what constitutes a good idea, these tandem neural nets may brainstorm new and potentially valuable ideas in an architecture called a "Creativity Machine." 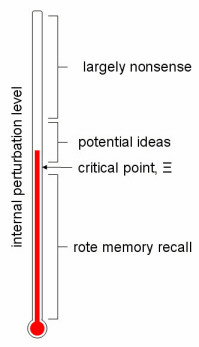 Details - An Imagination Engine is a trained artificial neural network that is stimulated to generate new ideas and plans of action through a very amazing effect that is an outgrowth of scientific experiments conducted in 1975 by our founder, Dr. Stephen Thaler. In these initial experiments, neural networks were trained upon a collection  of patterns representing some conceptual space (i.e., examples of either music, literature, or known chemical compounds), and then the networks were internally 'tickled' by randomly varying the connection weights joining neurons. Astonishingly, Thaler found that if the connection weights were varied at just the right level, the network's output units would predominantly activate into patterns representing new potential concepts generalized from the original training exemplars (i.e., new music, new literature, or new chemical compounds, respectively, that it had never been exposed to through learning). In effect, the network was thinking out of the box, producing new and coherent knowledge based upon its memories, all because of the carefully 'metered' noise being injected into it. From an engineering point of view, this is quite phenomenal: a neural network trains upon representative data for just a few seconds and then generates whole new ideas based upon that short experience. In effect, we quickly and economically create an engine for invention and discovery within focused knowledge domains.

To illustrate this phenomenon, we have represented the perturbation level as a temperature in the figure to the right. If the perturbation level is below a critical point called X (the Greek letter Xi), the network preferentially outputs learned, or 'rote' memories. Just above this critical point, the network predominantly outputs patterns that exercise most of the mathematical constraints learned by the network in training (i.e., what some might call the 'zen' of the conceptual space). Finally, at high levels of perturbation, the network outputs nonsensical patterns. (For more mathematical details on this process, see A Quantitative Model of Seminal Cognition: The Creativity Machine Paradigm.)

Of course activation patterns of neurons do not qualify as valuable ideas until they are perceived as such, either by individuals or societies. To this end, Thaler added what is known in neural network parlance as a perceptron, the very kind of network that has been successfully used over the years to simulate human perception and opinion formation. Now imagination engines could brainstorm with perceptrons on nanosecond time scales to generate new ideas, all within neural architectures called Creativity Machines.

As you might have already guessed, we have named our company Imagination Engines to celebrate the immense power of such internally perturbed neural networks to generate new ideas, novel plans of action, as well as paradigm shift neural network architectures.